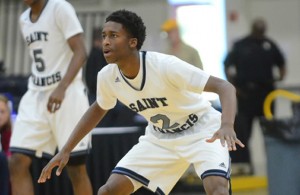 St. Francis (GA) won the Consolation Bracket Championship at the 2014 Beach Ball Classic with a 73-53 victory over Northland (OH) on Wednesday afternoon at the Myrtle Beach (SC) Convention Center.

St. Francis (13-3; Alpharetta, GA) led 34-15 at halftime and cruised in the second half, building leads as large as 29 points in the second half.  Kobi Simmons led St. Francis with 25 points as he connected on 10-of-12 from the field, including three of his four shots from behind the 3-point arc.