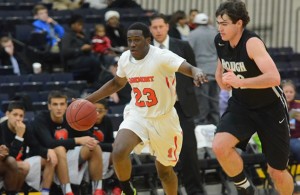 Sagemont (FL) scored a 55-51 victory over Hough (NC) to win the third place game at the 2014 Beach Ball Classic on Wednesday afternoon at the Myrtle Beach (SC) Convention Center.

Sagemont (12-3; Weston, FL) had to hold off a furious comeback by Hough (10-3; Cornelius, NC) late in the second half to earn the third place trophy.  Trailing 46-35 with 7:55 to play, Hough scored eight unanswered points to make it a one possession game.  Luke Maye capped the run with a layup with 5:32 on the clock to pull the Huskies to within three points at 46-43.  After the teams traded baskets, Prince Ali connected on a jumper and then Tyler Polley hit one of two free throws to give Sagemont a 51-45 lead with 2:10 on the clock.

Maye again brought Hough back with an NBA-range 3-point basket to cut Sagemont’s lead to 51-48 with 1:54 remaining in regulation.  Polley connected ona pair of free throws to push the Sagemont lead back to five points before Hough’s Chase Sweetman connected on a trey to pull the Huskies to within two points at 53-51 with 1:26 remaining in regulation.  Followinga  turnover by Sagemont, Maye, Sweatman and Connor Whipp all failed to tie or give Hough the lead as they each missed shots.  Nick DeFeria scored his only two points of the game from the free throw line with 15 seconds remaining  to seal the victory for Sagemont.

Sagemont was led by Ali’s 23 points while Polley added 15 points and seven rebounds for the Lions.

Hough was led by Maye’s 20 points and 11 rebounds.  Maye, who played in two Beach Ball Classics, posted a double-double in each of the seven games that he played over the two events.