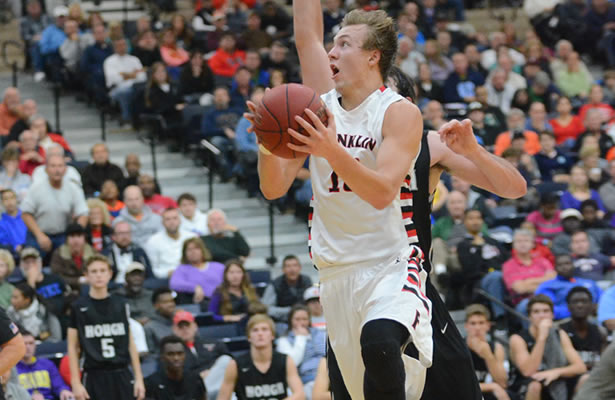 Luke Kennard posted another great scoring game at the Beach Ball Classic to shoot Franklin (OH) into the Championship Game with a 77-53 semifinal victory over Hough (NC) at the Myrtle Beach Convention Center.

Franklin (8-0) never trailed in the contest as Evan Crowe connected on a 3-point basket to open the scoring for the Wildcats and then Kennard tallied the next 16 points for Franklin. The Wildcats went on to lead by as many as 28 points in cruising to the victory.

Kennard ended the game with 39 points on 11-of-17 shooting from the field, including 8-of-12 from behind the 3-point arc, and a perfect 9-of-9 from the free throw line. Kennard, who has signed to play at Duke University, has now scored 130 points in his first three games in the 2014 BBC. That total breaks the four-game scoring record of 119 which was set by Nick Emery of Lone Peak (UT) in the 2011 Beach Ball Classic. As a team, Franklin tied the record for made 3-point field goals in a game with 16. The Wildcats matched the made threes by Tates Creek (KY) in 1990 and Eastern Commerce (Canada) in 2007.