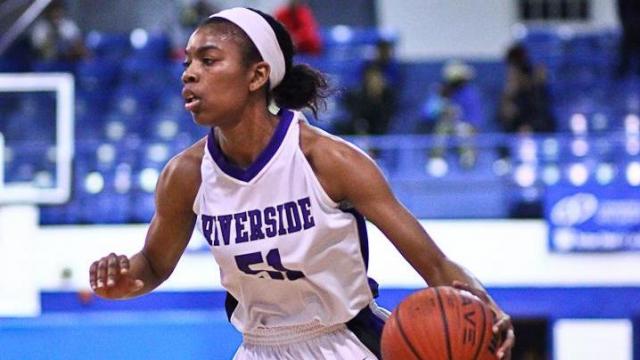 In the extra session, KK Storms game South Forsyth a 69-67 advantage just 12 seconds into overtime.  Riverside responded with eight unanswered points to open a 75-69 lead with 1:31 on the clock.  After trading baskets, Caroline Diem connected on a short jumper and then connected on a long 3-pointer from the corner to pull South Forsyth to withion one point at 77-76 with 24 seconds to play.  Storms had a chance to tie the game as she had a steal on the next possession but missed a jumper with eight seconds remaining.  Takwana Bland notched the final point for Riverside by connecting on one-of-two free throws with one second remaining and South Forsyth was unable to get a shot off before the buzzer sounded.

Riverside was led by Bland’s 26 points, while Kayla Jones added 22 points and 15 rebounds for the Knights.  South Forsyth was led by Sarah Myers’ 26 points.